Where there is growth of being, the sixty-four choices are limited, for the choices which mirror themselves return to the previous state, building the pattern of life-one, two, three, five, eight, thirteen, twenty-one—restricting the sixty-four of multiplication to the twenty-one of growth.
Book of Jubilee, Chapter 6.

The tree diagram below shows this process. The red coloured constructors are the ones pruned from this ‘multiplication’ tree because they mirror and mirror back as described above.

There are still some repetitions of constructors in the 21 possibilities. For example, one of the possibilities is UAD DAU UDA ADU UAD DAU UDA, which has many repeats, although none that are caused by mirror-and-mirror-back. The ones that have no repetitions (except that they end where they start) are coloured green, and of course these are the three cosmoses of the fourth world (see the article on worlds and cosmoses).

The number 21 comes about from this tree of growth, but also appears in other ways. For example, seven times three gives 21: we line up 7 combinations of constructors made from 3 forces. How many constructors appear in the tree altogether? Leaving out the original, each appears 21 times.

The book describes a way of making a square of 64 constructors. My interpretation of this for the square beginning with UAD is shown below.

I’ve shown the relationships of mirror (m) and follower (f) that are described. Any route through the square that is consistent with the arrows shown is bound to follow a path in the tree of growth, because each arrow represents a move to a mirror or to a follower, and there are no mirror-followed-by-mirror paths. To take a random example, moving from the top left of the square: from UAD go down to DUA, go down to ADU, go right to UDA, go up to AUD, go up to DAU. This takes us along one of the green paths in the tree.

We can superimpose pyramids on this square. Here is one example, showing the pyramid starting from UAD in the top left of the square.

The square of 64 contains a pyramid for each constructor,  “In the first column three descending; in the third column three ascending“. These are shown below:

The square of 64 constructors has within it 24 self-completing sequences. Each of them is one of the 3 cosmoses in the fourth world, but starting on different constructors. As discussed before, each of these sequences can be seen as an octave.  The 24 are shown in the diagram below, labelled 1-24 by the starting point.  The self-completing sequence is illustrated for  1, 6, 7, 12, 12, 18, 19 and 24. The others are not drawn.

“The octave is the means by which the three mothers set up the process of rhythmic response. It is the law that to each action there is an equal and opposite reaction.”
Book of Jubilee, Chapter 5

The octave arises from the internal structure of the fourth world cosmoses. The cosmoses are described in an earlier post, and are each formed as a cycle of constructors, the 3rd force in one constructor becoming the first force of the next. For example, the fifth cosmos dependant from UAD is:

In this pattern there are a total of 6 x 3=18 forces, but a more compact way of writing the pattern is to only write the repeating forces once, so that UAD-DAU would become UADAU, with the D in the middle serving as the last force in UAD and the first in DAU. Doing this to the entire cosmos gives the sequence:

The process is more clearly shown in a circular figure, since it runs in cycles.  In the figure below, the same cosmos is illustrated, with the forces arranged around a circle, moving clockwise from the right hand side, starting with UAD, which is numbered 1, 2, 3, and ending with ADU, numbered 11,12,1. 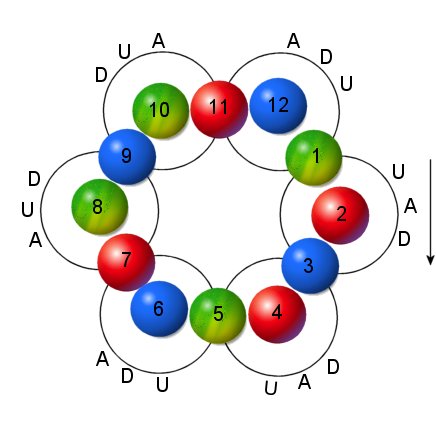 Energy steps within the octave

There are patterns within the cycle of twelve mothers. For example, the unifying mother appears in position 1, 5, 8 and 10, separated from each other by steps of 3 then 2 and then 1. The pattern is reversed for the affirming mother, which takes increasing steps, whilst the denying mother is evenly spaced in the cycle. These patterns are illustrated below: 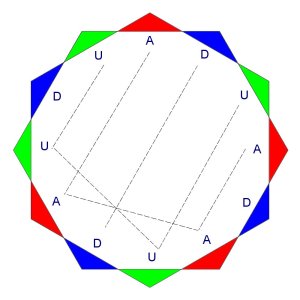 “The mother which starts each octave, the first in the initiating constructor, possesses the greatest energy, and this energy runs down in jumps of three, two, and one steps. The second mother in the initiating constructor starts slowly and builds up to higher energies by one, two and three steps. The mother in the third place maintains the same strength throughout the six constructors in steps of two, two and two.”

The Notes of the Octave

The pattern of the octave is the same as a musical octave, with seven notes progressing from the note do to the same note at a higher frequency:

The spacing of the notes in an octave is not constant. The mi-fa interval and the si-do interval are half as wide as the others (semi-tones rather than full tones). This same pattern is seen in the octave embedded in the sequence of twelve mothers.

The full tone intervals appears with another mother between the two notes. For example, the first two notes of the octave (do-re) are formed by the first three mothers in the sequence:

The semi-tone intervals appear with no third mother between the notes. For example, the first shortened interval (mi-fa) is formed by:

In many traditions the octave is seen as a model of cosmological processes, with the shortened intervals indicative of places where a change of pace or direction might occur.

These are explained in the Book of Jubilee as a consequence of the way the mothers are arranged:

One way to think about this is as follows:

This particular octave is about the interaction of two mothers, U and D; all of the notes are centred on these two.

Where the interaction between the two is mediated by the third mother, a smooth interaction takes place, and we get the full tone steps UAD (at do-re and la-si) and DAU (at re-mi and fa-sol).

Where the two mother meet without the mediation of the third, we get a different type of interaction: the UD at mi-fa slows the process, and the DU at si-do speeds up the process. In the centre of the octave we get both occurring together: UDU at sol-la.

Each fourth world cosmos contains two octaves. The one we have just looked at is complemented by a second octave starting halfway round the circle in position 7: 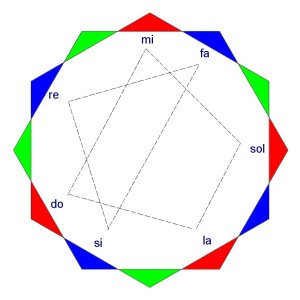 This octave has the same pattern, but is about the interaction of A and D, mediated this time by U. The two octaves within the cosmos interlock and maintain each other.

Some questions to ponder: How many octave patterns are there all together, taking into account all of the fourth world cosmoses? How do the two octaves maintain each other? What would they sound like? If there was a movement for the octave, a dance perhaps, what would it be like?

“Seven cosmoses depend from each constructor.”
Book of Jubilee, Chapter 3

The constructors make cosmoses by joining together head to tail – that is, the final mother in one become the first mother in the next. A cycle of constructors each connected to the next in this way forms a cosmos.

The First Cosmos in the First World

The first cosmos depending from UAD is the constructor and its mirror DAU. The cosmos forms an endless cycle of UAD-DAU–UAD-DAU-UAD… Contract-Repeat-Contract-Repeat… reflecting back and forth. 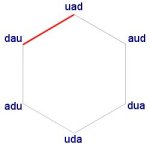 There will be two other similar cosmoses made of other mirror pairs. These three cosmoses together form the first world:

“The first world’s beings are the substance of that world, the hierarchical world. They come into being out of the six by combination of any two mirrors. Such beings do not yet have perceptible existence. They are the seeds of the multiverse, one turning one way, one the other. From their pairings are formed the bases of growth, compression and change. As yet time and space do not arise; in themselves they contain all the possible creations. It is the world of Gods—Gods in the likeness of fiery serpents or infinite vortices or the Miracle Gods who change the aspect of all received by them. It is a world of mirrors, ‘in our own likeness’.”

The Second Cosmos in the Second World

The second cosmos is formed by three constructors UAD-DUA-ADU.

There is another cosmos formed from the other three constructors: UDA-AUD-DAU. These two cosmoses together form the second world:

“The second world’s beings are also identical with the substance of their world. It is the substance of time and space, the world of resilience. When time expands, space expands; when time changes, space changes. The smaller the object, the faster its time; the greater the object’s extent, the greater its cycle of time. Wheels creating, adapting and replicating, spinning in all directions, weaving the fabric of space; Orbs expanding, shrinking and mutating, forming the extent and substance of all creations; each is dependent on the other. In this world all the possible universes are laid down in possible extent and possible duration. Here is the world of birth and death, the multiverse.”

The third and fourth cosmoses dependant from UAD are each formed by four constructors:
UAD-DUA-AUD-DAU and ADU-UAD-DAU-UDA.

These two, together with a third cosmos of four constructors excluding UAD form the third world:

When drawn out, each of them has a similar shape, reminiscent of an enneagram – of which more later. 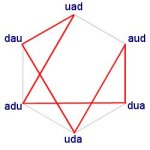 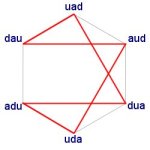 These three together make the fourth world:

“The fourth world, the world of structure, is inhabited by three types of material beings. In one the denying is fixed, in another the affirming has become active, and in the third the unifying has acquired material existence. They correspond to those material beings in whom only what they receive from outside exists, those beings in whom what is outside of themselves has to be related to what is inside them, and those beings who impose on the outside their internal worlds of possibilities. All three possess within them the other three worlds in due proportion, two parts from the first, two from the second and two from the third: in all these living beings the possibility exists to perceive the whole of creation.”

A good starting point for working with the worlds and cosmoses is to write down your own list of all the combinations from each constructor. How many are there, and why just that number? Which are repeated, and how many times? Why?

Consider the patterns within each cosmos. For example, the third world cosmoses have mirrors within them. What are their relationships? How much of the description of each world do you think comes from the patterns?

“Three asleep, the Gate, three awake – these seven are the seven potencies which, separated and now conscious of one another, bring into perceptible existence the servants, the constructors of creation.”
Book of Jubilee, Chapter 2

Here is one arrangement of the seven potencies or pillars of the Temple: the three awake standing opposite the three asleep, with the Gate in the centre. 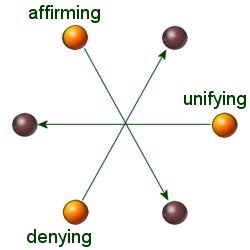 The motion of the three forces, the affirming, denying and unifying, create six swirlings in the spaces between the pillars. 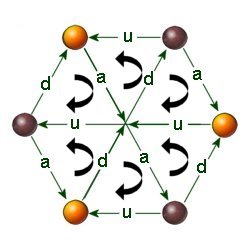 Each of the swirlings is made by the three forces in a different order. Each swirling starts with a force that flows around the edge of the Temple, from one pillar to the one next to it, from one awake to one asleep. The middle force flows into the centre, from the one asleep to the gate, and the final force flows out again, from the gate to the one awake.

On this way the pattern is formed of the six constructors. 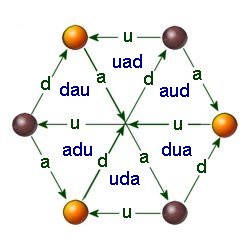 The birds from the trees upon the hill
announce, as they will and have since
they began to sing, the new millennia.

For what is new is only old tempered
by wind of changing circumstance.

Cry Jubilee unheard: the Lord shall
hear your song and speak it to the
wind. The birds will sing it then as now.